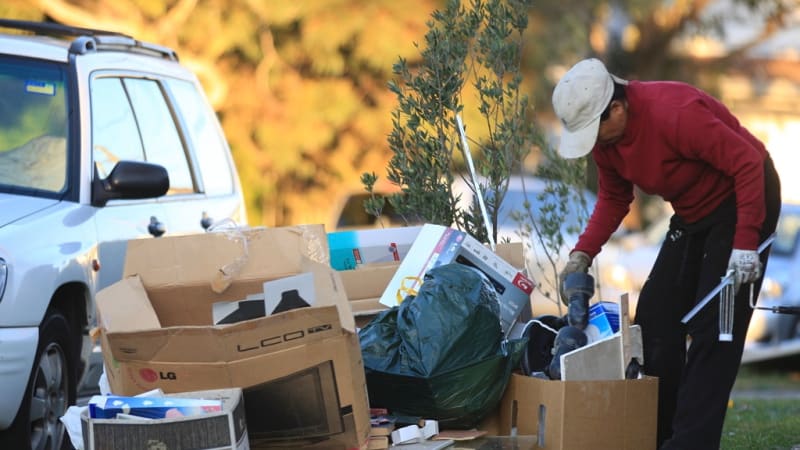 This year’s garbage out included an old racing bike that had been scrounged from someone else’s hard rubbish a few years ago. It was rescrounged immediately – I hope by a share-house youngster who won’t mind old-school cycling charms like reaching for down-tube shifters and fixing flats without the convenience of quick-release hubs.

There was an antique television set that was once a state-of-the-art Sony with a cathode ray tube, the last CRT television to be left on any verge anywhere in Melbourne, and a second-hand desk my son couldn’t get through the door of his share-house bedroom.

I even found a small drift of sand from a long-forgotten sandpit under all the other junk.

I chucked out a load of gear from various sports – plastic cricket bats and foam baseball bats and footballs of every shape and size, degraded, deflated and dusty, no longer working or wanted.

Among the sports gear was a boomerang, one of the most useless things you can give a kid. For a start, you need a space the size of a polo field cleared of all humans and dogs to even attempt to throw one – they are, after all, long-distance missiles, as likely to end up lost on a nearby golf course as back in the launching hand, or anywhere close.

And if they do come back they’re bloody dangerous, lethal bits of spinning plastic. You’d be safer ducking than trying to catch one.

So I didn’t throw the boomerang out. I placed it, carefully, on top of the pile. I hope it doesn’t return.

Matt Holden is an Age columnist.

Your Daily Horoscope for Monday, April 9

Does your morning fish oil tablet do anything?

If you are like me, you have been walking by the extra-large, grapefruitlike pomelos in...